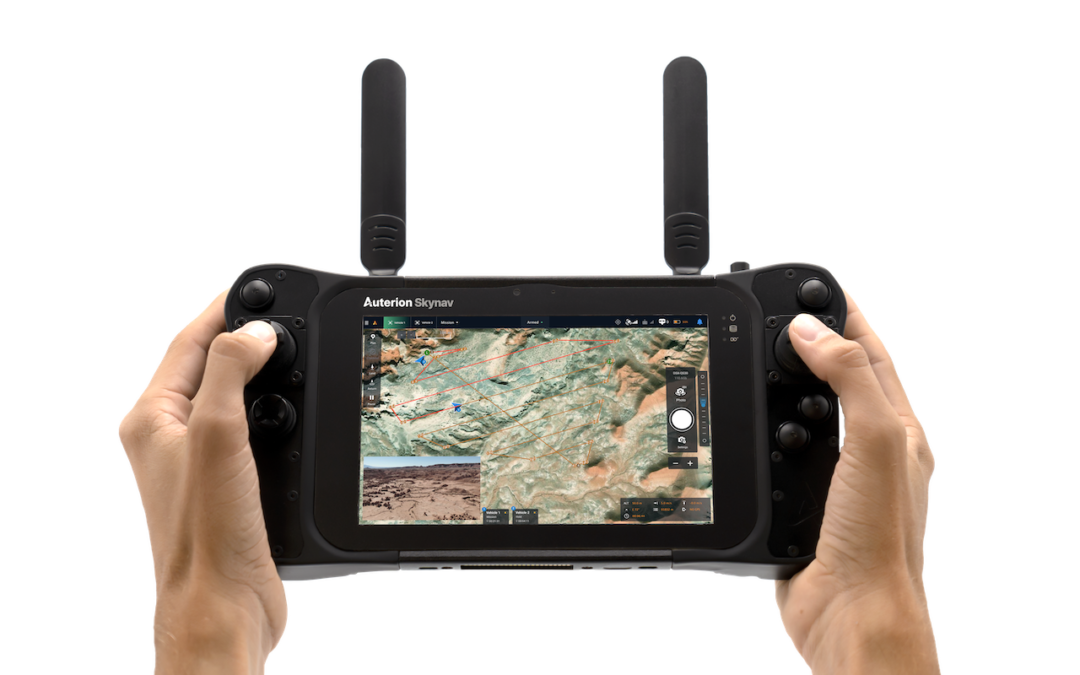 U.S. government agencies rely on Unmanned Aircraft Systems (UAS) or drones for a wide range of missions, whether it be intelligence, surveillance and reconnaissance (ISR), border control, search and rescue, and much more. The use of UAS in these areas has proven so successful that the government’s imagination for what drones can do in other areas has taken off. We’re seeing this across every agency, but particularly within the military branches.

In fact, the US DoD is progressing on some pretty wide-ranging efforts, such as making small unmanned systems available to troops in the field, something Auterion is supporting. But as the government’s appetite for employing drones for advanced uses grows, leaders should also be rethinking their current approach to operating and upgrading their unmanned aircraft and looking to streamline control over what is becoming an expanding and diverse fleet.

With that, Auterion Government Solutions is excited to announce Skynav. A scalable handheld ground controller, Skynav is powered by Auterion Mission Control and controls all UAS’ running Auterion Enterprise PX4 or communicate over MAVLink.

Designed with flexibility and the ability to scale in mind

Skynav is interoperable and can control any type of UAS, quads, multi-rotors, VTOLs, and fixed-wing as well as unmanned ground vehicles, all from the same unit. Equipped with Auterion Mission Control, it puts everything right at your fingerprints, including setting waypoints, surveying areas, scanning corridors, and more.

Imagine the ease of streamlining the collection of data from an expanding variety of sources, including day and nighttime full-motion video, high resolution still photos, signals intelligence as well as the metadata with these data streams. Or how about having the ability to see complex patterns and connections from your data, and understand how various forces impact each other. Skynav with Auterion Mission Control does just that.

It also sets itself apart because it leverages a reliable open source software base using widely-adopted industry standards, all available on a hardware platform. In other words, it’s not bound by the proprietary restrictions of other government vendors. It’s also fully compliant with the 2020 National Defense Authorization Act, Section 848.

Other benefits of Skynav for government customers include:

Built for the long haul

While Skynav may be fresh to the scene, Auterion and Auterion GS are not. We understand the needs of the government when it comes to how their drones operate. That’s why just last year the Defense Innovation Unit (DIU) announced a $2 million project with us to enhance its open source drone software, a project that has since been renewed by an extension contract. At the time, NexGov wrote that our PX4 platform, “would standardize the operating system for different drone models, (and) could one day power the Army’s entire fleet of small unmanned aircraft.”

We’re a different kind of defense contractor, one that’s bringing commercial tech to the government market. Skynav is another giant leap forward in scaling military drone operations, similar to how Auterion has done it with Skynode for commercial users and Skynode Gov for Government entities. It’s a continuation of our mission, powered by the adoption of open source standards and interfaces.

Right now we’re beta-sampling Skynav with select customers, but starting in August we’ll be taking orders widely. For more details on Skynav and to check out the specs, visit www.auterion-gs.com/skynav.